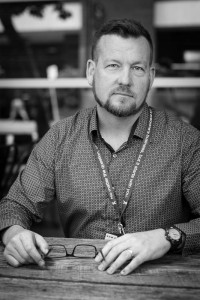 The Americans tend to refer to domestic violence as domestic or spousal ‘abuse’. I think that this term encapsulates so much of what violence against women is about. It is much more than physical abuse. It is also the abuse of a relationship, of love, of trust, of financial inequality, of a family structure, and the fear of shame by the victim that can lead to feelings of helplessness and isolation. My aim is to expose such perpetrators for what they are and to give support and protection to victims so that they can live freely and be themselves.

When Sean McDermott arrived at the Domestic and Family Violence Team in September 2012, he brought with him the ‘baggage’ from his work as a general duties officer, a domestic violence liaison officer and a prosecutor – the lessons learnt and the injustices witnessed. ‘I had one clear overarching goal in mind: to make the experience of a domestic violence victim, in her journey from the first contact with police until her matter had been resolved in court, to be as simple and as well supported as possible. To do this would involve advocacy for changes to the law and also to procedures adopted by operational police.’

Sean joined the NSW Police Force (NSWPF) in 1996. From the beginning he was confronted by the magnitude and complexity of domestic violence (DV) – NSWPF responds to over 300 DV incidents a day during the course of a year. Like most other police officers, he clearly remembers his first arrest which was for a very serious DV assault on a young woman, committed in a public place by her ex-partner. While this was the first of many serious DV incidents that Sean would encounter, several aspects of this particular case have continued to resonate with him:

What also became increasingly clear to Sean as he gained more experience, was that the dynamic of violence against women generally boiled down to one issue: the sense of inadequacy felt by a surprisingly large proportion of men that resulted in their perceived need for control over women and children. That part was simple. The reasons why some women continued to endure repeated behaviour without taking action were much more complex and yet very understandable. These issues have to a large degree guided Sean in his career up to and including his current role.

With this in mind, Sean has worked with his team and the NSWPF’s Corporate Spokesperson, Assistant Commissioner Mark Murdoch, to overhaul the way NSWPF treats all domestic violence incidents, with probably more progress made in the past two years than in the previous 25 years. Sean says, ‘We have seen tremendous changes in the way police respond to violence against women both in terms of the quality of investigations and prosecutions but more importantly in the way they approach such incidents.’

Some of the major changes have included:

Sean and his team are committed to ongoing work on the protection of women and children by improving police responses to domestic violence, ensuring that every offence warrants the investigation of all possible avenues of inquiry. They are determined to ensure consistency in the responses across the state ‘from Bondi to Bourke’ and beyond.