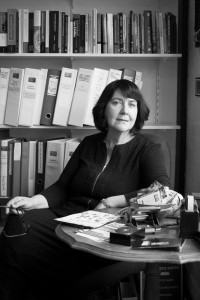 Wherever victims of human trafficking are exploited and harmed, I will do everything in my power to take action to help provide a pathway to freedom.

Jennifer Burn is the Director of Anti-Slavery Australia (ASA), an organisation which is housed at the University of Technology, Sydney (UTS). She is also an Associate Professor of Law at UTS and a practising lawyer. Jennifer and her team at ASA are dedicated to the abolition of slavery, servitude, slavery-like practices such as forced marriage and forced labour, human trafficking and extreme labour exploitation across Australia. ASA also provides a specialist pro bono service for hundreds of men, women and children who have been victims of any of these practices, and advocates for changes in laws and policies to protect their rights.

Through her work at ASA, Jennifer has helped women gain freedom from enslavement, reunited children with their mothers, and worked with government to make Australian law more responsive to the crimes of forced labour and forced marriage. Jennifer has also created outreach programs, working with young people who visit schools to raise awareness of slavery and human trafficking in Australia and to talk about what it means to be controlled, enslaved and exploited. Jennifer’s work also focuses on the safety and rights of newly arrived immigrants, providing them with information such as emergency telephone numbers as well as useful facts from Fair Work Australia.

It was in 2004, after she met a trafficked woman for the first time, that Jennifer became proactive in abolishing slavery in Australia. From that initial encounter, she came to understand the vulnerable position these women were in, even after rescue. Jennifer also recognised the power imbalance between those working to end slavery and those who have been exploited. She and her colleagues at ASA do everything they can to protect the identity of those who have been trafficked; even using a person’s story is viewed as a form of exploitation. Jennifer refuses to talk about specifics but is clearly inspired by the newfound face of freedom on rescued victims, a look which has been indelibly imprinted in her mind.

For her work in this area, Jennifer has received many awards, including UTS Vice-Chancellor’s Social Justice Medal (2004), the Law and Justice Foundation’s Justice Award for Community Legal Centres for advocacy in the area of human trafficking (2005), the Australian Human Rights Medal (2009), and the Henry Giblett Award from the Migration Institute of Australia for her outstanding contribution in the area of migration law education (2009). In 2013 Anti-Slavery Australia and Clayton Utz were jointly awarded the NSW Law and Justice Foundation’s Pro Bono Partnership Award. Jennifer was also named as the 2011 Zonta International District 24’s Honorary Member in recognition of her work and achievements in the field of human trafficking and advocacy for legal reform that will contribute to the advancement of the status of women.

Jennifer‘s goal is for all people – women, men and children – to live freely in their communities. She continues to work cohesively with various government and non-government organisations to develop and implement robust strategies to help ensure that every Australian and newly arrived immigrant sees, feels, tastes and lives freedom.